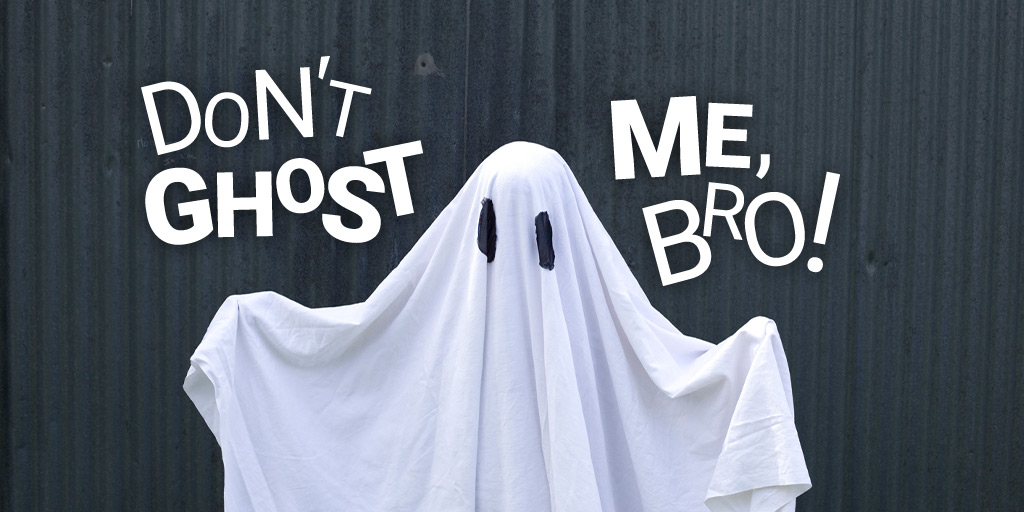 As the new year kicks off, it’s easy to get caught up in the ebb and flow of the hiring process. When you’re trying to find the perfect candidate, getting back to those who didn’t make the cut probably isn’t high on your priority list. Between posting jobs, scheduling interviews, and keeping up with daily tasks, it’s easy to forget about responding to that eager candidate.

Intentional or not, it’s becoming common practice for employers to “ghost” candidates. Ghosting is when someone, in this case an employer, seemingly disappears without warning — ignoring any further calls or emails. The term “ghosting” originated in the dating world, meaning companies are acting like bad Tinder dates instead of reputable establishments. And much like ghosting a date, ghosting a candidate can have lasting negative effects.

A colleague of mine, Bill*, told a story about being ghosted by an employer. He interviewed twice at a well-known healthy foods company and left both times feeling confident. He was excited about the opportunity because the office was close to his home and had the company test kitchen on location. Even after sending thank you emails, Bill never heard back from the employer. He was so put off by this experience that he’s boycotted the company ever since, and recommends their competitor whenever given the chance. By ghosting Bill, this company turned a once loyal customer into a passionate brand detractor.

Another colleague, Sam*, shared in a similar experience, except he had five interviews at the same company. He spoke to new people each interview and was sure he scored the job, especially after five rounds. Sam was shocked when weeks went by and he never heard from the employer again. This left him with a jaded view of the hiring team and company as a whole.

Ghosting is not only rude, but can also have lasting effects on your company. Employers who ghost leave candidates with a bad taste in their mouths, affecting their overall perception of your brand. It’s important to remember that even though it’s just an interview, you still want to represent your company in the best way possible. After all, these candidates could be some of your most loyal customers – don’t risk losing them over a lack of response!

Another way ghosting could affect your company is by ruining your online employer reputation. Company review sites, like Glassdoor, allow for not just employees, but also interviewees to leave reviews on a business. You definitely don’t want your ideal candidate turning down the interview because he or she read that your company’s communication is subpar.

Go Forth and Reply

The lesson here: just take the time to respond to candidates. These are people who were excited about coming in and meeting you. They (hopefully) took the time to research your company and update their resume to show how they’d be a good fit. Maybe they didn’t think the job was for them and wouldn’t think twice about not hearing from you. It’s more likely however that this candidate is excited and waiting to hear back; they possibly put their job search on hold while waiting to hear. Not sure how to break the news? This article gives great advice on writing a warm and friendly rejection letter. But don’t make it more difficult than it has to be. After all, any communication is better than no communication. Now there are no excuses, so go forth and break the ghosting pattern!

*All names have been changed to protect the identity of those who have been ghosted.