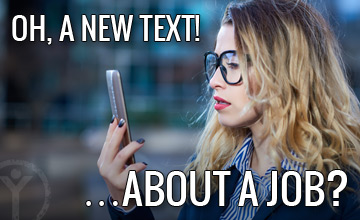 “Sorry, it’s just not going to work out. Good luck with your life.”

Breaking up via text isn’t anything new, but it still makes us cringe at a personal level because it feels incredibly impersonal. It’s almost paradoxical, because the texting medium itself represents a connection we have with people we know and trust.

Text messaging has become a powerful piece of communication in our everyday lives. While we all know that person that has steadily refused to participate in the SMS frenzy, research shows that it’s grown to be a core part of how we interact with others. Other than making a call or taking a photo, sending text messages is at the top of the list in terms of how people use their mobile devices.

For recruiters on the front lines of communication for their organizations, it’s worth noting the power of text. It’s innately personal and incredibly direct – what better way to cut straight through the noise and get a person’s attention right away? Plus, it’s becoming an increasingly acceptable communication tool in the business world. It makes sense that recruiters will want to leverage this ubiquitous form of communication for reaching and engaging with candidates.

Want to start a conversation with your most sought-after candidates?
Find out more about Nexxt Text2Hire text messaging campaigns.

But the challenges of texting are not insignificant. Despite the seemingly harmless nature of a simple, text-based message, this communication method can lead to serious issues and problems in the workplace.

The Hazards of Texting

Some companies may not be aware, but there are rules in place that protect consumers from unwanted communications–including text messages. In order to send messages to someone, companies must first have the individual’s express permission. Papa John’s is one firm that has been in hot water for sending spam text messages, but there is no shortage of stories accusing other companies of wrongdoing. This compliance issue alone should encourage companies to pause and determine if their efforts are in line with federal law. The minimum fine starts at $500 per violation, so charges can add up quickly for those firms that don’t follow the rules around gaining permission and allowing users to opt out of future communications.

Reach opt-in candidates who are ready and willing to connect, with Nexxt Text2Hire.
Find out more and get a free quote.

On a more personal level, texting can get you fired, or it can at least cause some serious headaches. This is due in part to two key characteristics of the SMS medium: low friction and a lack of nonverbal cues. First is the low friction nature of texting as a communication method. It requires five seconds to shoot off a text message, whereas a phone call or email need a little more time. For many of us, it’s easy to send something in the heat of the moment.

There is no shortage of stories of this playing out in today’s world. A recent news story about a series of racially charged text messages led to the termination or resignation of numerous police officers. This is a prime example of how quickly this kind of problem can spiral out of control. There are also instances of employees being fired for texting activity outside the workplace. Right or wrong, it’s a clear reminder that each of us should take care to never say anything in a text that we wouldn’t be comfortable with our boss seeing.

And just in case you’re thinking that you’re safe by deleting messages, you’re probably not. This article digs into why that is: Texting may seem to users as ephemeral — and hard to trace — as a phone conversation. But the messages leave behind an electronic record, and for lawyers, those records are increasingly being used to bolster a variety of claims, particularly in the workplace. For employers, that means a growing source of liability as business-related texting continues to proliferate.

The second reason it is challenging is because texting lacks the nuances of voice and tone that help us navigate daily conversations. While the exact amount of value we get from those nonverbal cues is up for debate, we know there is at least a portion of communication that depends on those factors. We’ve all received that message that left us scratching our head, wondering about the underlying sentiment. It’s better to leave the emotionally charged conversations for a phone call or face-to-face interaction to avoid any misunderstanding.

The Time I Insulted a Candidate with a Text Message

Sometimes the penalty for an errant text is not as severe, but it can still be painful. Years ago I was recruiting for a set of positions that was incredibly difficult to fill. That led to me spending long hours on the project, increasing my frustration as the weeks passed.

Eventually I was almost finished, and I was definitely more high-strung than usual. The candidate I was chasing for the final slot had been leading me on and was slowly becoming less responsive as the days went by. I thought I might be losing him, but despite everything I put into every conversation, there didn’t seem to be a way to turn it around.

Finally I asked him point blank what the issue was. Why was he backing off? Was there something I could do to fix it?

And the guy responded with something that drove me over the edge. He mentioned that he wasn’t interested because he had heard that the company wasn’t a good place to work. I took it as a personal offense as I had been with the company since it was a new startup and took great pride in the satisfaction of our workforce.

I sent back a sharp response that I regret to this day. To paraphrase: “Upon further review of your resume, we don’t need a candidate like you now. Or ever. Thanks anyway.”

Though I quickly apologized (and fessed up to my boss, just to be transparent), I never heard from him again. It was, and still is, my reminder to take care with my words, especially in the world of text messages.

Despite the risk and issues, the medium has the potential to be an incredibly valuable tool for connecting with candidates. The key is having an awareness of the potential pitfalls so you can capitalize on the benefits and value that text recruiting has to offer. Or better yet, work with a partner like Nexxt who can make sure you get the most from your efforts.

If you’ve tried text recruitment, what was your experience like? Tell us about your success story – or horror story – in the comments.

Do text recruitment right with less risk, all the reward.
Click here to learn more about Nexxt Text2Hire messaging campaigns — which get a 15% response rate within the first hour!

About the Author: Ben Eubanks is the Principal Analyst at Lighthouse Research, a research and advisory services firm helping to identify trends and leading practices in talent, learning, and HR. He blends his background in corporate HR and recruiting with targeted research to create actionable insights for companies across the globe. You can learn more about Lighthouse or connect with him on Twitter.